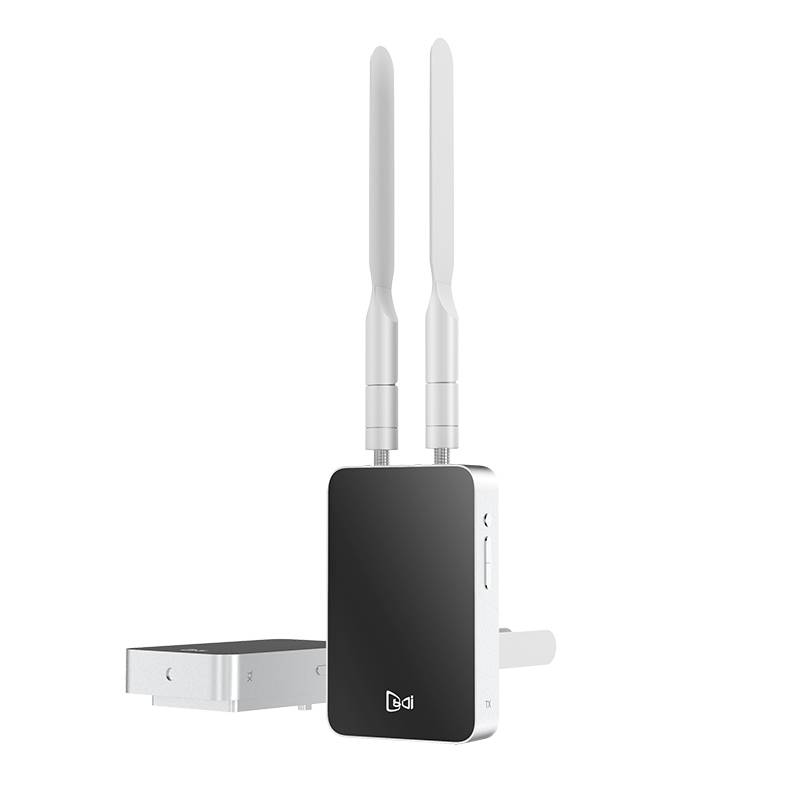 The WTS200 wireless video transmission system is a new affordable HDMI wireless video system which can support 4K(3840*2160P)@30Hz. The WTS200 has a range of 656 feet line of sight range with transmission that can accomplish less than 100ms latency. It supports Battery, Power Bank, Adapter to charge. A fully charged 660mAh battery can power either the receiver or transmitter continuously for up to 4 hours.

The WTS200 transmitter has dual HDMI Ports, one HDMI input and HDMI loop out for audio and video signals. However, the WTS200 receiver has one HDMI ports that can output both audio and video to two monitors at once. Dual antenna design significantly improves the quality and stability of a wireless link. The mini and fashion metal alloy material design allows the WTS200 to carry easily and be used in multiple situations. Such as outdoor scene shooting, wedding live broadcast, network anchor etc.

In the process of film and television shooting, traditional wiring has always been a major problem that troubled the production, such as the distance between the camera and the display terminal is long, the wiring is messy, people step on, the scene environment is complex, wiring accidents are often prone to occur, which can affect the smooth filming of movies and televisions. Especially in some live broadcast occasions, live broadcast accidents are more likely to be caused. The WTS200 wireless video transmission system can circumvent these problems very well. The
use of wireless image transmission equipment for Ultra-high-definitions video transmission in daily shooting has become a trend, and its application in the film and television circle is increasingly widespread. Meanwhile, the WTS200 has strong wall penetration ability and sends ultra high definition 4K@30Hz HDMI signal to the monitor with low latency.

HDMI loop out on transmitter

Dual-antennas design gets a more fluent and stable video

Write your message here and send it to us